in About Haiti, Wildlife
5 min read
A A

There is a total of 58 amphibian species recorded in Haiti. Pennsylvania State University led an expedition to the remote mountains of southwest Haiti this past October. Their goal was to search for the long lost La Selle Grass frog (E. glanduliferoides) that had not been seen in more than 25 years. They also assessed the status of many of Haiti’s 48 other native species of amphibians, most of which depend on the country’s shrinking mountain regions: Massif de la Hotte in the southwest and Massif de la Selle in the southeast.

This frog is named after its call, which it projects like the ventriloquist which inspired its name. Its unusual call consists of a rapid, seven-note series of chirps, with the initial four notes rising slowly in pitch before plateauing; the call is released in widely-spaced intervals, often minutes apart. Prior to this expedition, the species was only known from a few individuals. Last seen in 1991.

(E. amadeus)Called Mozart’s frog because when Blair Hedges, who discovered the species, made an audiospectrogram of the call, it coincidentally resembled musical notes. Its call is a four-note muffled whistle at night; usually given as a shorter, two-note call at dawn and dusk. Last seen in 1991.

(E. thorectes)Approximately the size of a green grape, this is one of the smallest frogs in the world. In Haiti, this species has a very restricted range, occurring only on the peaks of Formon and Macaya at high elevations on the Massif de la Hotte. Last seen in 1991.

(E. corona)This species was named after a subtle row of protuberances that resemble a crown on the back of its head. Prior to this expedition, the species was known from less than 10 individuals, and is likely to be extremely rare. It is an arboreal species, occurring in high-elevation cloud forest. Males call from bromeliads or orchids, which they appear to require for reproduction. Last seen in 1991.

(E. parapelates)A surprise find: This is the first record of this species from this area (previously only known from two localities on the Massif de la Hotte). This is now the only place where two burrowing frogs are known to share the same habitat.This species is quite spectacular, with big jet black eyes and bright orange flashes on the legs. Males call from shallow, underground chambers and eggs are also laid underground, where they hatch directly into froglets. Last seen in 1996.

Is a species of frog in the Eleutherodactylidae family endemic to Hispaniola and found in both the Dominican Republic and Haiti. Its natural habitats are dry scrub forests, mesic broadleaf forests, and secondary forests. It is a terrestrial frog that lays its eggs on the ground. It is threatened by habitat loss.

The Baoruco burrowing frog or Cabral robber frog (Eleutherodactylus hyposteno) is a species of frog in the Eleutherodactylidae family. It is endemic to Hispaniola where it is found on the Tiburon Peninsula, Haiti and eastward to the Baoruco Mountain Range, Dominican Republic.

his species occurs in the Tiburon Peninsula, east to the Massif de la Selle, and also in the Massif du Nord, in Hispaniola. It has been recorded from sea level up to 1,324m asl. 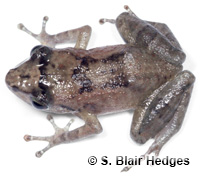 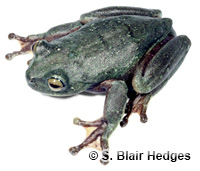