in About Haiti, Nord, Tourism
2 min read
A A Known as Haiti’s second capital, Cap-Haitien is the North department’s urban pole. Famous for its concentration of historical monuments, this city and its surrounding areas is one a rare few Haitian cities thriving from their tourism based economy.

Picturesque Caribbean beaches and a long list of Haiti’s most famous monuments, including the world heritage site of Citadelle La Ferrière, have all contributed to making Cap Haitian a worldclass vacation destination. In fact, Cap Haitian welcomes a greater number of international visitors than anywhere else in the country. 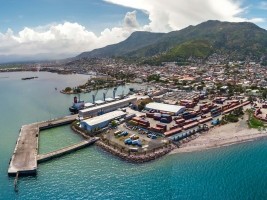 This city of Cap Haitian is unique and its particularly well-preserved French colonial architecture is certainly worth a look.

Located in Cap Haitian, the Numismatic Museum was inaugurated by the Bank of the Republic of Haiti (BRH), in 2012. Aiming to highlight Haitian numismatic heritage, the museum exhibits a comprehensive collection of all the coins and banknotes that have circulated in Haiti from the period before the first European colonists arrived in America to contemporary times.

The museum’s collection of coins, introduces visitors to the genesis and progression of the Haitian monetary unit, the Gourde, whose name comes from “peso gordo” (heavy weight). Notes and coins are exposed alongside a narrative of their respective histories.