in About Haiti, Cinema, Culture
7 min read
A A

The historiography of Haitian cinema is very limited. It consists of only one double issue of the journal of the French Institute of Haiti Conjunction, released in 1983, devoted to film; a book by Arnold Antonin, published during the same year, entitled Matériel pour une préhistoire du cinéma haïtien (“Material for a prehistory of Haitian cinema”); and an article by the same author in the 1981 book Cinéma de l’Amérique latine (Cinema of Latin America) by Guy Hennebel and Alfonso Gumucio Dagrón.

Cinema appeared in Haiti at almost the same time as in other countries. On December 14, 1899, Joseph Filippi, a representative of the Lumiere cinema, made the first public screening at the Petit Séminaire while visiting the island. The next day he filmed a fire in Port-au-Prince. 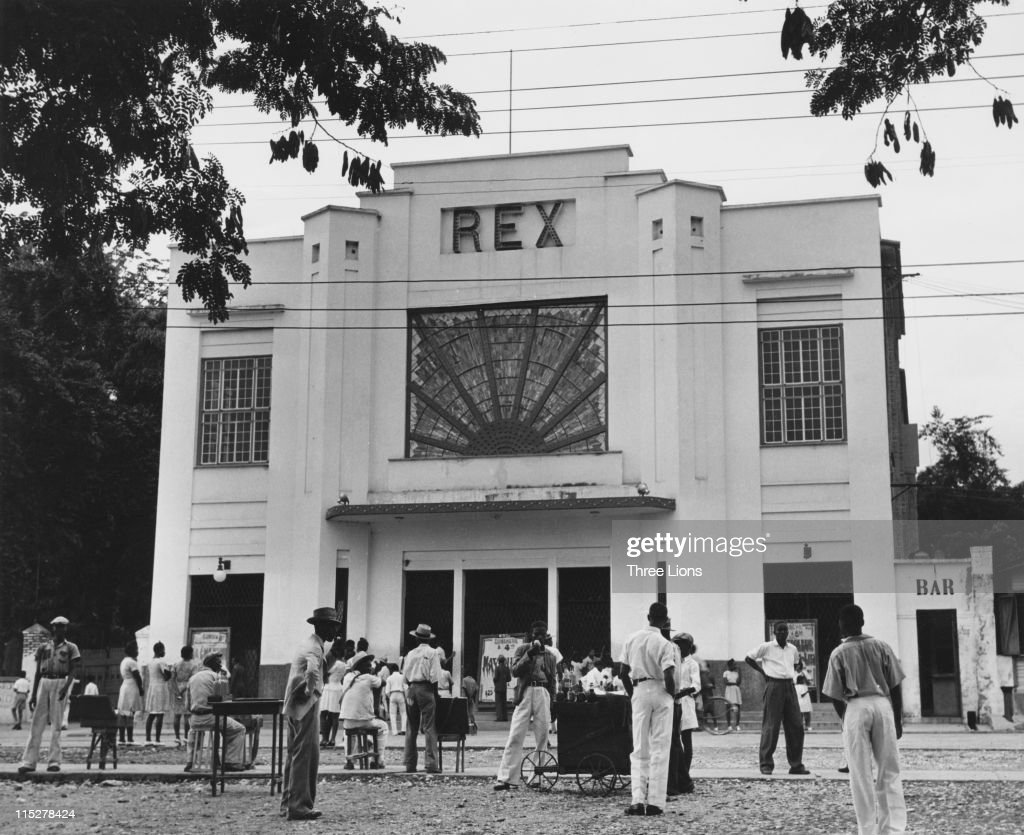 There are many films from the period of U.S. occupation (1915–34) in the Library of Congress; these depict Marines and official ceremonies.

Other early movies filmed in Haiti, depicting health care, agriculture, and scenes of social life (particularly carnival) may be found in the Library of Congress and the Pathé-Ciné Library.

The first continuous film showings, after the visit of the Lumière brothers’ representative, took place starting in 1907 at the Petionville Grand Hotel, and then starting in 1914 at the Parisiana located in Port-au-Prince’s Champ de Mars. The Parisian was the first major cinema and theater (500 seats) which existed in the country.

In 1933, the Eden Cinema opened in Cap-Haïtien. The Paramount in Port-au-Prince opened the following year, and the Rex Theater in 1935.

The radio pioneer Ricardo Widmaïer was also a pioneer of cinema. In the early 1950s, he made newsreels that were filmed at the Paramount Cinema. In his laboratory in Port-au-Prince, he developed his 16 mm films in black and white and in color. He produced the film Moi, je suis belle with Edouard Guilbaud. Jean Dominique, the screenwriter, also lent his voice to the narration. The sound was done by Herby Widmaier who was then only 15 years old.

Although there is no systematic research and therefore no accurate information on this subject, several variety films were made before the François Duvalier’s ascendance in 1957. Emmanuel and Edouard Guilbaud made many films on political events and athletes, often under the direction of Ricardo Widmaier.

The films seen by Haitians

Though local film production is practically nonexistent, Haitians still go to the movies. In the 1960s, viewers had the choice of films produced by Italian and French directors. Over time, however, and despite occasional shows by the French Institute, Hollywood cinema has gradually taken over Haitian movie screens.

Throughout the Duvalier regime, strict surveillance was exercised over films, lest they convey revolutionary ideas. For example, Luis Buñuel’s La fièvre monte à El Pao (Fever mounts in El Pao) was quickly removed from cinemas. At that time, westerns and films inspired by Chinese martial arts were the most frequent choices available to the public.

In the 1980s, the Maxence Elisée group appeared in the Haitian film market. This corporation has allowed the Caribbean Haitian public access to popular films made in France and French versions of American films.

Today, this group (now Leisure Ltd) dominates the distribution and exhibition of cinema and Haiti has the most theaters in the country, including the three largest, the Imperial (5 screens), the Capitol (4 screens), the Rex Theater and the Paramount.

During the Duvalier dictatorship, there was little film production within the country. This was largely caused by the country’s extreme poverty and the technological and financial constraints of film production.

In the 28 years of the Duvalier dictatorship, only three films were produced. The first was the 1976 short film Map paly net by Raphael Stines, a Creole version of Jean Cocteau’s Le bel indifférent. The second was Olivia, a 1977 feature film by Bob Lemoine. The third was Rasul Labuchin’s 1980 film Anita, which was very successful thanks to the short-lived “Ciné-Club” Point-de-Vue (Point of View). Olivia was shot on 35mm film, and the other two on 16mm.  Many films have been made now since the fall of Duvalier, many of them by Haitian filmmaker Arnold Antonin.

Militant film and film of the diaspora

In the diaspora, there is a forceful cinema of denunciation and struggle against the dictatorship. Arnold Antonin is known for his documentary films, including Les Duvalier sur le banc des accusés (1973, 25mm, black and white) and Haïti le chemin de la liberté (1974, 120 mm, feature, black and white). The latter film, sponsored by the magazine Les Cahiers du Cinéma, elevated Haitian film to an international level and is still viewed as a cult film. Arnold Antonin’s other films include:

At the fall of Duvalier, a new activist cinema emerged. It no longer consists exclusively of documentaries but also includes dramatic films, like those of Raoul Peck, whose movies include:

The semi-biographical film Lumumba was successfully released in Africa and the United States.

Other notable films include:

The Haitian filmmaker Roland Paret, who lives in Canada, has also directed many short films on various topics. In Paris, Michèle Lemoine and Elsie Hass are also notable. Most Haitian movies are made by directors of Haitian nationality or origin, but they are often financed by foreigners.

Haitian filmmakers making a name for themselves in Hollywood include Jean-Claude La Marre, director of Trapped: Haitian Nights, and Romane Simon.

The creation and production of images in the social and economic conditions of Haiti seem to find a way into the media light, especially in the video. Indeed, many independent producers, next to the television, which continues to produce very little, make shooting in video, feature films and documentaries in a number that far exceeds the film itself.

Arnold Antonin himself since his return in 1986, in a first period that has made corporate videos and educational, except for a short film about Port-au-Prince, entitled The Third World War has already occurred (1996). From 1999, he started with the Center team Petion-Bolivar, whose Oldy August (camera and editing) and Mathieu Painvier, production assistant, in conducting a series of documentary portraits of workers in lower classes country’s small museums and personal emblematic figures of Haitian art as Tiga, Cédor Albert Mangonès, Andre Pierre, Patrick Vilaire, Marithou. From a text by Gary Victor, he adapts the satirical film Piwouli and zenglendo in 2001.

Many videographers working in the field, either as producers or as camera operators, or as editors. Some of them also work as directors. It should be mentioned among them names like; Mario Delatour Jean Fabius, Richard J. Arens, Claude Mancuso, Jean-Pierre Grasset, Richard Senecal, Rachel Magloire, Patrick Barth, Karl Lafontant,Romane Simon,Guy Cantave, Laurence Magloire, Jean Claude Bourjoly Camille Moses said Kharmeliaud etc..

Raphael Stines was also the director of a television series entitled Pè Toma and Bouqui nan Paradi, from part of Fouche. Mention also the fear of loving and Reginald Lubin Barricades Richard Senecal.

Characteristics of film production in Haiti

There is weak artistic and technical preparation in the Haitian film industry. Most technicians and artists, including actors, learned on the job. They are forced to solve technical problems, instead of dealing with creative problems. Professionalism is virtually absent. There is no Haitian legislation on cinema, and the state has shown no interest in film production. There are a few film schools in Haiti, such as the Cine-Institut.

The Motion Picture Association of Haiti (MPAH) was founded in 2007 by Hans Patrick Domercant. Once a year, it invites various businesspeople, civic leaders, renowned Haitian actors, and Hollywood actors of Haitian descent to celebrate the advancement and past achievements of the Haitian movie industry.