in About Haiti, Culture, Dance
5 min read
A A

Deeply connected to Haitian music, dance in Haiti is filled with community, emotion, spirit, and history. Despite cultural stereotypes that label dance as a taboo activity reserved only for religious or spiritual rituals, or the views of many who think of dance as a “women’s only” activity, dance has managed to evolve and embed itself into the lifeblood of the Haitian people.

The beat of the drum resonates from the soul of the Haitian people and is expressed through movement. Haitian dance has its roots in Africa and tells the stories of important life events, invokes spirits, and promotes fellowship among those in earshot of the sounds.

This style of dance originates specifically from Haiti, and it shares the same name as the style of music that drives it: Kompas. Kompas dance is driven by the quick tempo beats provided by guitars, saxophones and synthesizers. Similar to meringue dancing, but performed at a slower tempo, Kompas involves moving the pelvis, shoulders, arms, hands, hips, and feet. Kompas can be a partner or a solo dance, and some people have described it as the Haitian version of salsa dance. Watch a YouTube video of Haitian Kompas Dance 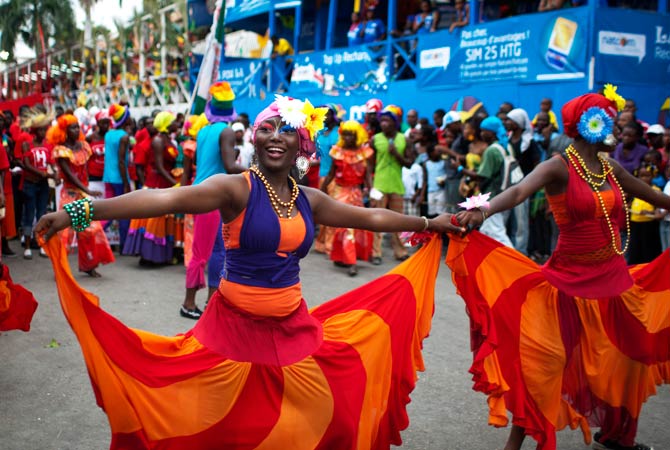 The Rara Festival is a yearly celebration that falls between Ash Wednesday and Easter Sunday. Rara is unique in that it combines traditional music with cultural Haitian Dance, and is sometimes infused with expressions of political protest. Despite the many reasons there are for observing Rara, the festival is embraced by all Haitians and is widely celebrated. Rara musicians and bands compete to win prizes by provoking the festival-goers to dance. The festival usually closes with a lead male dancer performing a traditional dance and salute. Watch a YouTube video of Rara Festival Dance

Haitian dancing mixes African styles with cultural traditions. In the Haitian Vodou religion, it is believed that each of the gods and goddesses, called Loa or L’wa, inspired their own unique dance movements that range in dynamics from subtle to aggressive.

Yanvalou is the name given to a form of dance associated with Haitian Vodou, but it was originated in Benin, West Africa. In Haiti, Yanvalou is performed in a group as a prayer, invoking deities and moving the dancers to lose consciousness and enter into a state of trance. The dance movements can include wild spinning, undulation of the spine with the hands placed on bent knees. Watch a YouTube video of Yanvalou Dance .

An American dancer named Katherine Dunham traveled to Haiti in the 1930s and was inspired so deeply by Haitian dance that she began studying Haiti’s culture, traditions, and history. Dunham learned the traditional and ceremonial dances and presented them internationally, making Haitian dance a tangible form of expression throughout the world. Dunham’s unique blend of dance styles also helped to evolve American modern dance by combining Haitian movements with those of the emerging modern dance artists of the time.

Later in her life, Katherine Dunham led a hunger strike to protest discrimination toward Haitian boat people. For this, the Haitian President awarded Dunham a medal of Haiti’s highest honor and named her the “Spiritual Mother of Haiti.” Watch a YouTube video of Katherine Dunham’s “Haitian Storm” dance.

A student of Katherine Dunham, Jean-Léon Destiné, was a dancer and choreographer from Saint-Marc, Haiti. Destiné is known as the father of Haitian professional dance. His choreography combined elements of Vodou with his own personal blend of movements inspired by spirited drumming. In the late 1940s, Destiné established a dance company in Haiti and in NYC. Watch a YouTube video of Jean-Léon Destiné’s choreography.

More recently, a Haitian dancer named Jean Appolon, who grew up in a conservative middle class family in Port-au-Prince Haiti, planned to change his family’s negative feeling toward dance by pursuing a dance career. As a young boy, he saw a television performance from Haiti’s School of the Arts and was inspired to take up dance, though his family did not approve of their son being a dancer. “What dance has really taught me is how rich we are as Haitians and as people of African descent, and the impact of the Afro-Haitian tradition for dance around the world,” says Appolon. “That’s something that makes me extremely proud, and I want to be the next generation to represent that.”*

Jean Appolon moved to Boston, MA in 1993 and earned a degree at the Joffrey Ballet School. Appolon’s goal is to preserve Haiti’s cultural legacy through dance, celebrating the connection between Haitian dance and the rites of Vodou ceremonies. In 2006, he opened a free summer dance program in his hometown of Port-au-Prince to help other children learn more about their culture through the study of dance. Watch a YouTube video of Jean Appolon’s Summer dance program in Port-au-Prince.

As important as music is to the Haitian people, dance is a vital way for Haitians to express, heal, evoke, and celebrate life. Dance in Haiti is always evolving, thanks to pioneers like Jean Appolon, who have established free or low-cost dance education facilities to help Haitians expand their art within and beyond tradition. Though, one does not need to attend a class to understand how to dance in Haiti; as soon as the drum starts beating, you will know how to dance.