in About Haiti, History
6 min read
A A 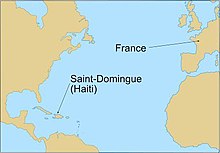 Free blacks and mulattoes begin to amass wealth and power. Many acquire plantations, especially coffee plantations in the West and the South.

“These men are beginning to fill the colony and it is of the greatest perversion to see them, their numbers continually increasing among the whites, with fortunes often greater than those of the whites . . . Their strict frugality prompting them to place their profits in the bank every year, they accumulate huge capital sums and become arrogant because they are rich, and their arrogance increases in proportion to their wealth. They bid on properties that are for sale in every district and cause their prices to reach such astronomical heights that the whites who have not so much wealth are unable to buy, or else ruin themselves if they do persist. In this manner, in many districts the best land is owned by the half-castes. . . These coloreds imitate the style of the whites and try to wipe out all memory of their original state”

— Colonial administrators writing to the Ministry of the Marine

The Makandal Conspiracy. François Makandal (alternately spelled “Mackandal” or “Macandal”), a maroon leader, conspires to poison all the whites in the North in a plot intended to spread to “all corners of the colony.” Across the North, Makandal’s vast network of collaborators – mostly trusted domestics – begin poisoning their masters’ households, including other slaves who can’t be trusted.The whites search frantically for the cause of the illnesses and deaths. After an interrogated female slave betrays the rebel leader, the planters launch a massive manhunt.

Maroons were fugitive slaves who often fled into the mountains and lived in small bands while eluding capture. This phenomenon, called “marronage,” was crucial to the fight for Haiti’s independence. Maroons were some of the revolution’s most powerful figures, responsible for organizing attacks and uniting disparate groups even when their leaders deserted their cause and joined the colonists.

“Marronage, or the desertion of the black slaves in our colonies since they were founded, has always been regarded as one of the possible causes of [the colonies’] destruction . . . The minister should be informed that there are inaccessible or reputedly inaccessible areas in different sections of our colony which serve as retreat and shelter for maroons; it is in the mountains and in the forests that these tribes of slaves establish themselves and multiply, invading the plains from time to time, spreading alarm and always causing great damage to the inhabitants.”

— From a 1775 memoir, on the state of maroons in Saint Domingue 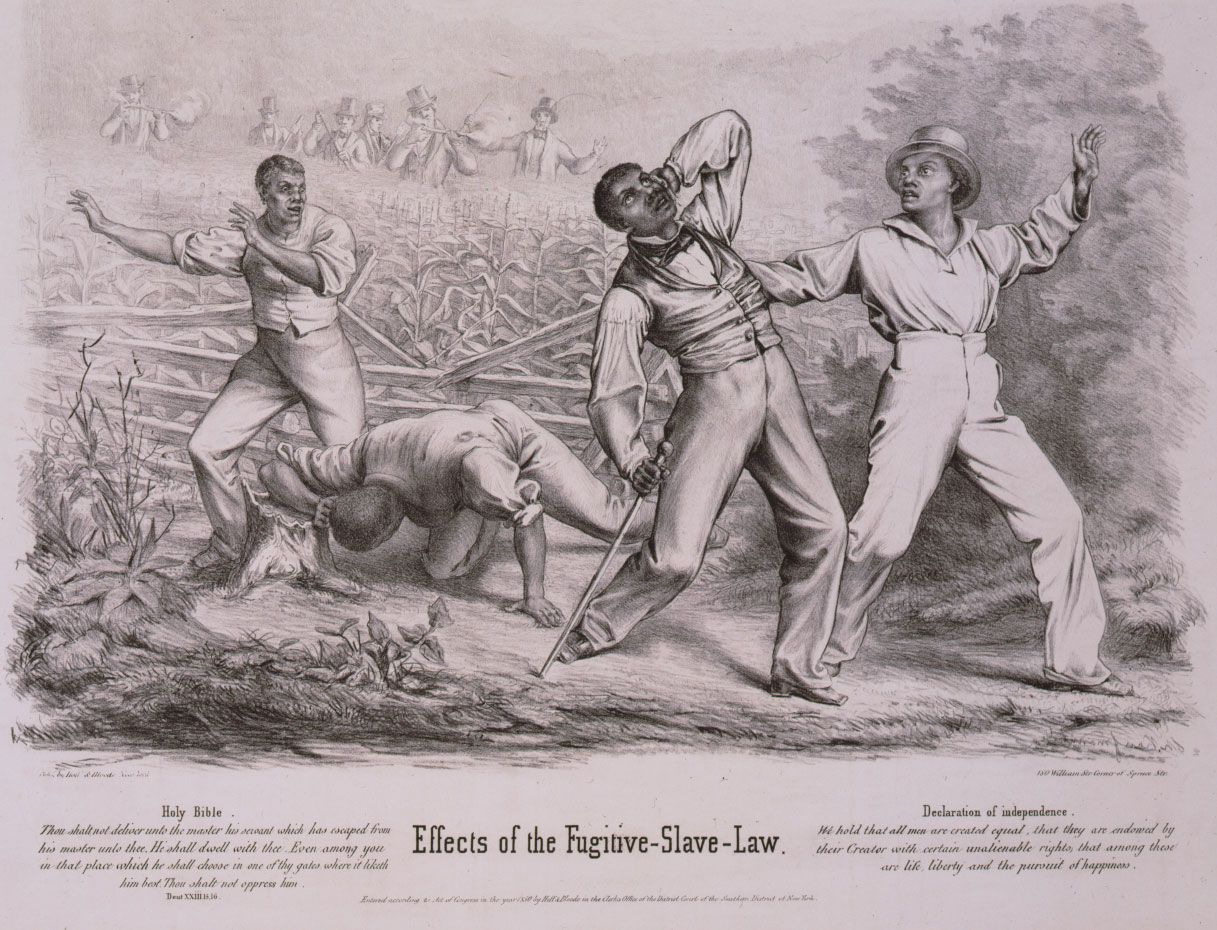 “The slave . . . inconstant by nature and capable of comparing his present state with that to which he aspires, is incessantly inclined toward marronage. It is his ability to think, and not the instinct of domestic animals who flee a cruel master in hope of bettering their condition, that compels him to flee. That which appears to offer him a happier state, that which facilitates his inconstancy, is the path which he will embrace.”

Makandal is executed. Colonists burn Makandal at the stake in the middle of the square in Le Cap. Owners bring their slaves and force them to watch. Despite witnessing his death, many slaves insist in Makandal’s immortality and he becomes a major inspirational figure for the slaves during the revolution.

Whites seek to control the affranchis as their population grows along with their wealth and power. Affranchis, primarily composed of free mulattoes, threaten the colony’s power structure as they become influential landowners in the colony.

Legislation designed to frustrate their ambitions and prevent assimilation with whites forbids the affranchis to hold public office, practice privileged trades (such as law or medicine), assemble in public after 9pm, sit with or dress like whites, gamble, travel, or enter France. These offenses are ruled punishable with fines, imprisonment, chain gang duty, loss of freedom, and amputation.

Despite these restrictions, affranchis are still obliged to compulsory military duty between the ages of 15 and 45. Furthermore, they are still allowed to lend money, a service which the colonists are becoming increasingly reliant on. During the 18th century the credit provided by the affranchis is critical to Saint Domingue’s growing size and wealth.

The Seven Year War in Europe ends, and the Treaty of Paris is signed by Britain, France, Spain and Native Americans in Europe and the North American colony.

The colonists increasingly resent France’s hold on their production, which prevents them from profitable trading with other countries. Colonists begin seeking greater administrative control of local affairs and the planters’ autonomy movement begin to gain momentum. 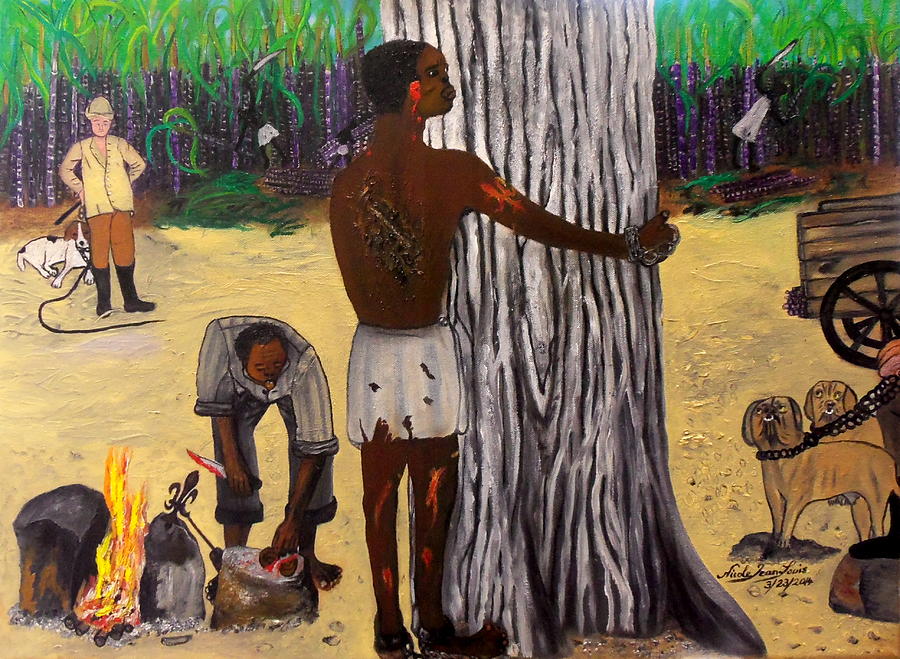 Louis XV issues Instructions to Administrators, which outlines new restrictions against blacks and mulattoes. The Instructions elaborate on the Code Noir of 1685 and mulattoes find that they are stripped of many of their freedoms and privileges in the colony.

Over 800,000 African slaves are brought to Saint-Domingue from 1680 to 1776. Over a third of them die within their first few years in the colony. Slaves imported during this time are primarily from the kingdoms of the Congo and Angola. However, by this point the scope of the Atlantic slave trade has expanded so considerably that some slaves are brought from as far away as Mozambique, on the southeastern coast of Africa.1776The United States declares its independence from England. Many of the values espoused in the new republic’s Declaration of Independence influence the thinking of slaves in Saint-Domingue, including the Declaration’s famous preamble, which reads:

“We hold these truths to be self-evident, that all men are created equal, that they are endowed by their Creator with certain unalienable Rights, that among these are Life, Liberty and the pursuit of Happiness.”

That same year Adam Smith writes that Saint-Domingue is “the most important of the sugar colonies of the West Indies.”

France and Spain sign the Treaty of Aranjuez which officially recognizes French Saint-Domingue on the western third of Hispaniola. 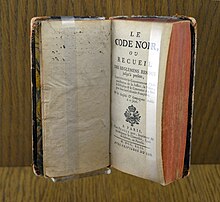 France re-imposes the Code Noir from 1685 due to planter abuses, this time issuing reforms that address slaves’ work hours, food rations, and quality of life. The Code restricts punishments and establishes minimal controls over the whites. The Code also legally obliges owners to provide slaves with small plots of land to grow food exclusively for their personal use. This issue of land rights is to become a central focus of the slaves’ demands during the revolutions

From 1784 to 1785, new royal ordinances from France make it possible for slaves to legally denounce abuses of a master, overseer, or plantation manager. Few slaves take advantage of these new rules, however, and the ones who do find that in reality the same system is still in place.

The 1788 Le Jeune case clearly demonstrated that the colony’s legal system clearly still favored whites over blacks regardless of evidence. Le Jeune, a planter in the North, killed a number of his slaves after suspecting a poison conspiracy and tortured two other women with fire while interrogating them. Though Le Jeune threatened to kill his slaves if they tried to denounce him in court, fourteen of them registered an official complaint in Le Cap. Their allegations were confirmed by two magistrates of state, who went to the plantation to investigate. The two men found the interrogated women still in chains, their legs so badly burned they were already decomposing. One died soon after. Despite this, white planters lined up to support Le Jeune. The governor and mayor wrote at the time that “It seems, in a word, that the security of the colony depends on the acquittal of Le Jeune.” The court was clearly complicit when it subsequently delivered a negative verdict, rendering the case null and void.