in About Haiti, Geography
7 min read
A A

Haiti, occupying the western third of the island of Hispaniola, consists of two peninsulas, separated by the Gonave Gulf. Haiti is the third largest country in the Caribbean behind Cuba and the Dominican Republic. It’s a rugged, mountainous land, dominated by three main massifs (mountain ranges). The highest point is Pic La  Selle in the Massif De La Selle. It stands at 8,793 ft. (2,680 m). Haiti has the second longest coastline (1,771 km/1,100 mi) in the Caribbean, with Cuba having the longest. La Gonave and La Tortue are its most significant islands. Lake Azuei and Lake of Miragoane are the lakes of note.

The only major river is the Artibonite; it rises in the Dominican Republic and flows across the border into Haiti. There are a few dozen smaller rivers and hundreds of (small) streams.

Tropical; semiarid where mountains in east cut off trade winds.

The climate is tropical with some variation depending on altitude. Port-au-Prince ranges in January from an average minimum of 23 °C (73.4 °F) to an average maximum of 31 °C (87.8 °F); in July, from 25–35 °C (77–95 °F). The rainfall pattern is varied, with rain heavier in some of the lowlands and on the northern and eastern slopes of the mountains.

Port-au-Prince receives an average annual rainfall of 1,370 mm (53.9 in). There are two rainy seasons, April–June and October–November. Haiti is subject to periodic droughts and floods, made more severe by deforestation. Hurricanes are also a menace.

The wildlife of Haiti is important to the country because of its biodiversity.

According to the World Conservation Monitoring Centre, Haiti is considered to be “one of the most biologically significant countries of the West Indies”.

With an estimated 5,600 plant species on the island of Hispaniola, some of which only occur in Haiti, 36% are considered as endemic to the island.

A mountainous area country, it is situated in the western three-eighths of Hispaniola and shares a border with the Dominican Republic.

There are nine life zones, from low desert to high cloud forests, as well as four mountain ranges, and hundreds of rivers and streams and the coral reefs in the seas that surround the islands.

Issues of environmental damage, expanding population, deforestation and erosion are of concern; less than 2% of the original forest remains on account of deforestation.

This degradation is traced from the 17th century to 19th century starting with the French colonization of the Haiti and population explosion during the 20th century and for the purpose of forestry and sugar-related industries, degraded the forests. and the environment.

The regions of extreme biodiversity in Haiti have been brought under legal law (under legal enactment of June 23, 1983) of protection and preservation of the ecology and the biodiversity of the identified areas.

Apart from the major aspect of conservation of plants and animals in general, the park administration are also entrusted with the task of preserving the endangered species of mammals such as Plagiodontia aedium and Solenodon paradoxus.

In addition there are two other parks the Pine Forest National Park, in the eastern Massif de la Selle, and the Historic Citadel National Park in the Massif du Nord.

In these four parks no hunting, illegal logging and transfer of land for any development activity are allowed; however, enforcement of the laws has not been stringent due inadequate funding for maintenance and security arrangements. However, visitors are allowed to see the wildlife, the water falls and the general rain forest vistas in these parks.

While the four national parks protect an area of 25,000 hectares (62,000 acres), there are proposals on the anvil to bring 18 more areas of the country under protective cover which encompass an area of another 23,000 hectares (57,000 acres).

La Visite National Park (French: Parc National La Visite) is one of the two national parks of the Republic of Haiti. La Visite is a part of the Massif de la Selle mountain range. Its highest peak is 2275 meters in elevation. The park covers approximately 11,419 hectares of land with 1897 hectares above 2000 meters in elevation, and consists mainly of pine forest, grasslands, and some montane broadleaf forest at an altitude above 1,700 m (5,600 ft). The Haitian government established the La Visite National Park in 1983. The capital, Port-au-Prince, is only 22 kilometers north from the park. The western boundary of La Visite is the ridge of the Massif de la Selle. 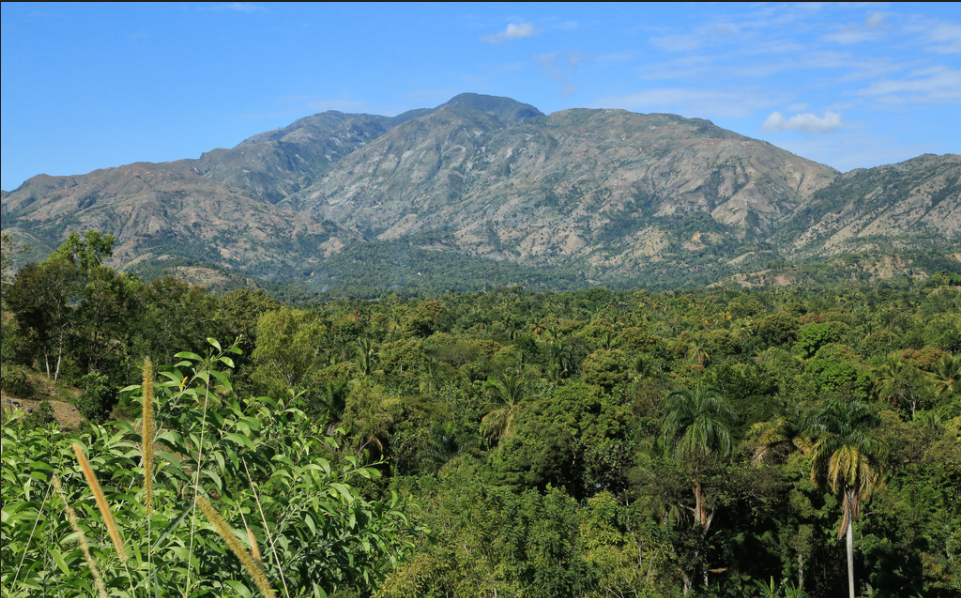 The park receives an annual average rainfall of 4,000 millimetres (160 in). The Rivere Ravine Sud rises from these mountains and flows through the park. Karst limestone formations and agricultural areas are also part of the park. There are two major types of vegetation in the park – the wet forests on limestone formations (in an elevation range of 800-1200m), and the cloud forest combined with pine forest including endemic plant species. The largest broad leaf trees are of pine some of which are 45 metres (148 ft) in height.

Detailed floristic surveys have recorded 470 species of trachophytes, which include 367 species of anglosperms, 99 species of mosses, 63 species of liver worts. In addition, the vascular plant species reported are 136, of which 29% are endemic to Haiti. Orchids are also found in large numbers. Other wildlife consists of birds and amphibians which are mostly endemic. The most productive agricultural lands of the Plaine de cayes are within the park area. The park has many trekking paths including to the mountain trek to peak Pic Macaya (2,347 metres (7,700 ft)