in About Haiti, Wildlife
3 min read
A A 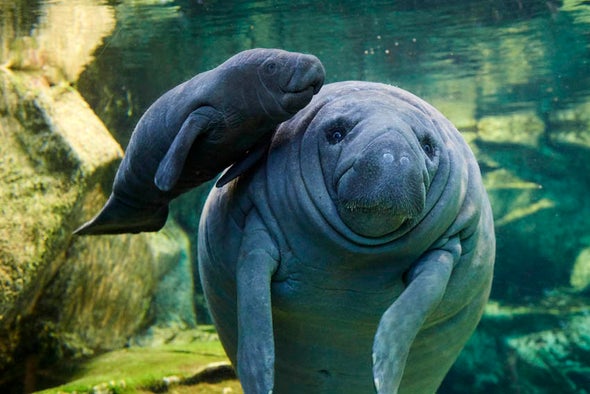 Sirenia is an order of fully aquatic, herbivorous mammals that inhabit rivers, estuaries, coastal marine waters, swamps, and marine wetlands.The Antillean manatee are endangered and have been of great conservation concern to federal, state, private, and nonprofit organizations to protect these species from natural and human-induced threats. The name manatee comes from the Haitian word manati (breast or big beaver). They are usually found at Fort-Liberté, Department of Nord-Est.

Rodents make up the largest order of mammals, with over 40 percent of mammalian species. They have two incisors in the upper and lower jaw which grow continually and must be keep short by gnawing. Most rodents are small though the capybara can weigh up to 45 kg (100 lb).

Hispaniolan Edible Rat is an extinct specie of rodent in the Echimyidae family.

Hispaniolan Hutia or Zagouti (creole) is an endangered specie of rodent in the Plagiodontia family.

Capybara or Carpincho (spanish) is the largest rodent in the world. They can’t be find in Haiti in the wild, except only in restricted areas.

The “shrew-forms” are insectivorous mmmals. The shrews and soledons closely resemble mice while the moles are stout bodied burrowers.

The bats’ most distinguishing feature is that their forelimbs are developed as wings, making them the only mammals in the world naturally capable of flight. Bat species account for about 20% of all mammals.

Some bat species native to Haiti include the greater bulldog bat, the sooty mustached bat, and Waterhouse’s leaf-nosed bat.

The order Cetacea includes whales, dolphins and porpoises. They are the mammals most fully adapted to aquatic life with a spindle-shaped nearly hairless body, protected by a thick layer of blubber, and forelimbs and tail modified to provide propulsion underwater.

The Caribbean monk seal, west indian monk seal,  is listed as Extinct in the Hispaniola region (EX), there is no reasonable doubt that the last individual has died, on the IUCN Red List of Threatened Species.

Source: List of Countries of the world , Wikipedia, Gutenberg US.