in About Haiti, Nord-Ouest, Tourism
2 min read
A A

Môle-Saint-Nicolas (Haitian Creole: Mòlsennikola or Omòl) is a commune in the north-western coast of Haiti. It is the chief town of the Môle-Saint-Nicolas Arrondissement in the department of Nord-Ouest. Christopher Columbus’ first voyage to the Americas landed at the site of what is now Môle-Saint-Nicolas on December 6, 1492. The town received its present name after France gained control of the western part of Hispaniola in 1697. 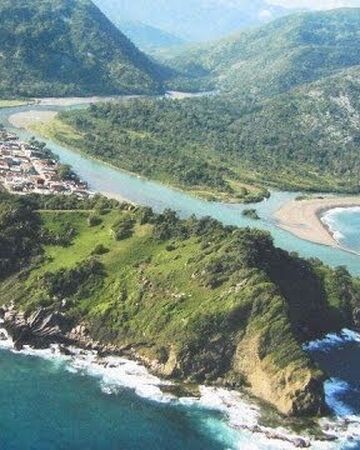 Môle-Saint-Nicolas has a population of about 4,000 people, with another 20,000 spread throughout the rural areas nearby. The road network of Haiti is in general decrepit, with roads in Nord-Ouest being no exception. However, in Môle-Saint-Nicolas itself, the roads are passable in a sturdy vehicle. There is a dirt airstrip, Môle-Saint-Nicolas Airport, to the north of the town which is serviced by two airlines: Mission Aviation Fellowship and Sunrise Airways. The town has running water from a run-of-river channel constructed in the 1970s, which feeds a reservoir above the town and is distributed via PVC pipes to spigots throughout the town. A medical clinic in the town has been staffed by Slovakian volunteer doctors from a private university, since the end of 2006.

Local fishing is a major industry in this part of the country. The production and distribution of wood charcoal is another major industry of the local people. There is a port for transporting charcoal to larger cities that utilizes wooden sailing vessels to transport the major fuel for cooking in Haiti. Charcoal production has devastated the original forest that once covered this area. The landscape surrounding Mole looks more like the high desert of Arizona than a lush tropical island that was first described to Europeans by Christopher Columbus.