in About Haiti, History
7 min read
A A

Primary electoral assemblies in Saint-Domingue are formed to elect colonial representatives to the legislative body in France. The outcome, facilitated by Louverture, results in positions for Laveaux and Sonthonax as deputies to the French legislature.

Power struggles develop in the face of Louverture’s growing power. To solidify his position and strengthen his ties, Sonthonax appoints Louverture Commander-in-Chief of the army. Laveaux sails to France as deputy while Sonthonax reluctantly stays in Saint-Domingue to perform his duties as civil commissioner. He plans to depart the colony in eighteen months when his assignment ends.

Louverture forces Sonthonax to return to France prematurely in a political move calculated to strengthen his position and gain favor in France. Sonthonax, despite wanting to leave the colony in the first place, finds himself forced out. As a result, instead of a normal and peaceful departure, the event becomes a humiliating and “forcible expulsion.” The remaining civil commissioners in the colony defer to Louverture, reaffirming that he is the most powerful figure in Saint-Domingue. Louverture misjudges, however, and instead of gaining favor abroad his audacity threatens the French and he is quickly seen as a major threat.

The British surrender their fight for Saint-Domingue and negotiate peace with Louverture. Louverture agrees to grant full amnesty to French citizens who didn’t fight with the British, all black troops enrolled in the British army, and to the émigrés who had abandoned the British prior to the opening of negotiations.

France sends another official agent to Saint-Domingue upon the return of Sonthonax. Commissioner Hédouville arrives in Le Cap. His mission is to promulgate laws of the French legislative body, to “entrench respect for French national authority,” to prevent blacks from abusing their freedom, and to strictly enforce French law against the immigrants who first came to the colony in 1771.

In reaction to France’s mounting fear of Louverture and his black army, Hédouville tries to disempower Louverture by dividing him and Rigaud. Though he is unsuccessful, Hédouville manages to force Louverture’s resignation from the Directory, insulting him in France and arranging to replace him with three European generals. In addition, he fills the Saint-Domingue army with white soldiers, sending the black troops back to plantations. Slaves view Hédouville’s actions as an attempt to reinstate slavery and a new wave of insurrection breaks out.

Louverture signs a secret alliance treaty with England and the United States. 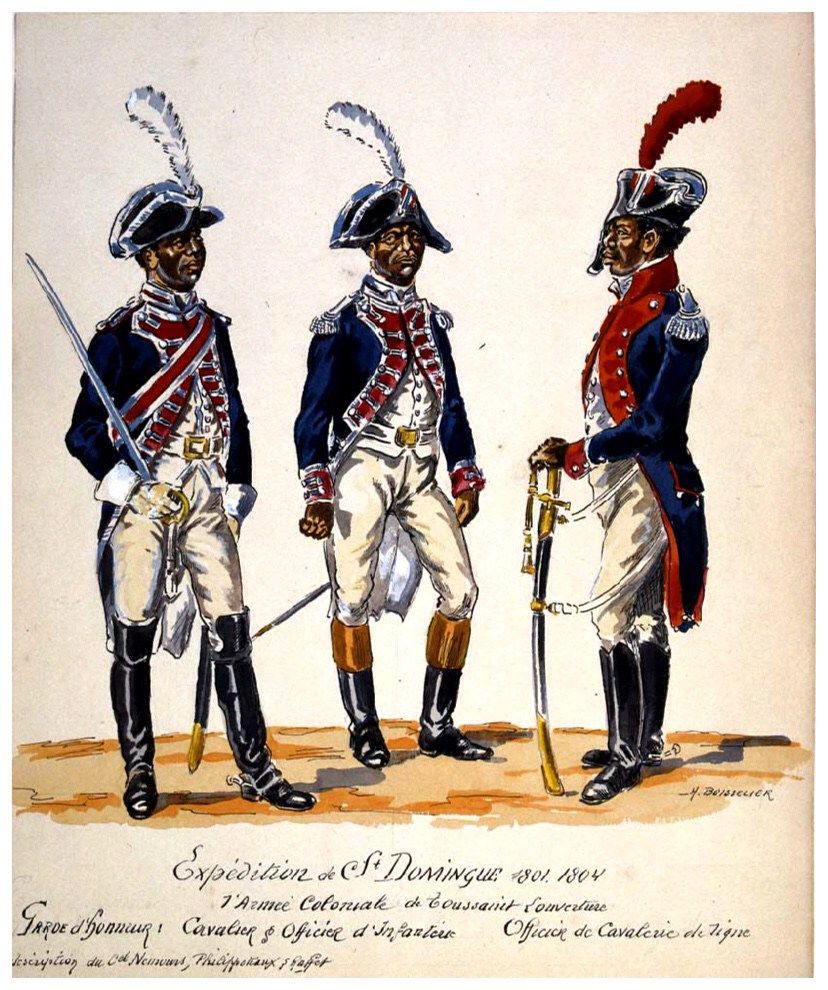 British forces evacuate Saint-Domingue as part of an agreement not to interfere with trade with France’s colonies. The French economy, depressed during its wars against Spain and England, reopens to colonial imports. At the same time merchant bourgeoisie lobby to reinstate the slave trade. Napoleon Bonaparte faces increasing pressure in France to bring down Louverture and take back Saint-Domingue.

Hédouville missteps and tries to have Moïse arrested. Moïse, “the idol of the black workers” and Louverture’s nephew, manages to escape, issuing a call to arms to black workers throughout the plain. Louverture orders Dessalines and his troops to march on Le Cap to arrest Hédouville. Meanwhile mulattoes from around the colony join Rigaud in the South. Louverture concurrently strengthens and reorganizes his army in the North.

Bonaparte’s overthrows the Directory in France, destroying the democratic republic and its anti-slavery principles. He declares himself Consul-for-Life, restores the pre-Revolution status quo of white rule, and turns his attention to France’s colonies.

Civil war between Louverture and Rigaud breaks out: Rigaud takes over command of Léogâne and Jacmel while Louverture take over Petit-Goâve. This power struggle, fraught with issues of race and class, ultimately benefits the economic interests of the Americans and British, who seek to maximize their trade to the detriment of the French.

“From the vantage point of international politics, Saint Domingue was being manipulated as a piece on a chessboard, and the outcome of its internal struggles would be a key to the particular political and economic advantages that each of the three contending foreign powers intended to reap.”

Louverture sends a military expedition into Spanish Santo Domingo to bring the territory under his rule. At the same time a mass uprising of armed black workers breaks out in the North in support of Louverture. Louverture’s negotiations with the Spanish ultimately fail but he successfully gains the masses’ popular support. Moïse marches in the South with 10,000 troops.

Bonaparte sends a new commission to Saint-Domingue to confirm Louverture’s power in the colony and instate France’s most recent constitution. The new constitution proclaims that French colonies are to be governed by a set of “special laws” that take into the account the particularities of each territory. It states that Saint-Domingue is not to be represented in the French legislative body and will not be governed by laws for French citizens. The constitution does not address the colony’s general emancipation, but it is carefully worded to assure blacks of its inviolability.

Louverture, meanwhile, is focused on ending civil war in the South and disarming Rigaud and his army.

Dessalines defeats Rigaud with the help of American vessels at the Jacmel port. Louverture exiles Rigaud to France and re-divides the areas of conflict. He grants general amnesty to every person who helped him fight Rigaud.

Louverture is proclaimed the colony’s Supreme Commander-in-Chief. He and his revolutionary army of ex-slaves are “the uncontested dominant forces in Saint-Domingue” and he begins to impose what is essentially a military dictatorship. He has an army of 20,000 men to enforce his position as “absolute master of the island-colony.”

Louverture institutes a new set of policies enforcing the traditional plantation system so that the colony’s shaken economy can produce exports for France. This is an extension and reinforcement of earlier work codes imposed by French civil commissioners such as Sonthonax, Polverel and Hédouville. The laborers see the policies as an effort to re-impose slavery. They further object to Louverture’s plan to import Africans to increase the Saint-Domingue’s labor force and buoy its economy.

The governor of Spanish Santo Domingo cedes control of his territory to Louverture. To make his achievements permanent, Louverture forms a central assembly to write a new constitution for all of Hispaniola that abolishes slavery on the entire island. Louverture’s achievements during his years in power include social reforms, structuring and organizing a new government, establishing courts of justice and building public schools.

Louverture proclaims the new constitution in Saint-Domingue and is declared Governor General for life. The constitution, which is sent to France, sanctions the structures Louverture has already set in place, and emphasizes the bourgeois principles of the French Revolution.

Slavery is abolished forever and the constitution eliminates social distinctions of race and color, stating “all individuals be admitted to all public functions depending on their merit and without regard to race or color.” All individuals born in the colony were to be “equal, free, and citizens of France.” Voodoo is outlawed, mandatory labor is codified and Catholicism is established as the colony’s official religion. Black slaves, chafing against Louverture’s mandatory labor requirements, reject the measures through various forms of resistance.

By now planters are increasingly unhappy with the state of affairs in Saint-Domingue and are relying on Bonaparte to unseat Louverture, restore slavery, and facilitate the rise of the colony once more. Bonaparte is sympathetic, declaring that “Toussaint was no more than a rebel slave who needed to be removed, whatever the cost.”

In the United States, President Thomas Jefferson reassures the French that he opposes independence in Saint-Domingue and pledges to support Napoleon’s agenda.

A massive uprising against Louverture’s regime breaks out in the North and Moïse is rumored to be involved. In Limbé, west of Le Cap, 250 whites are killed and rebels occupy Gonaives with the goal of killing whites, uniting mulattoes and blacks and declaring Saint-Domingue independent. The rebels support popular land distribution and charge Louverture with exploiting the masses at France’s benefit. Moïse is known to oppose his uncle, and has refused to make his laborers work, saying “was not the executioner of his own color” and that “the blacks had not conquered their liberty to labor again under the rod and the whip on the properties of the white.”

Louverture has Moïse arrested, tried without defense, and shot. He brutally suppresses the uprising and 1,000 rebels are killed. The ruling class, split on Louverture’s actions, becomes further divided. Louverture’s left-wing support dwindles, considerably weakening his position. He becomes completely isolated from whites, mulattoes, and blacks, his former base of support.