in About Haiti, History
7 min read
A A

In France, The Republic is declared, abolishing the monarchy. In January of the following year Louis XVI is beheaded.

Rebel leaders, including Toussaint Louverture, join Spanish forces to fight against the French. France declares war on England and Holland.

The Reign of Terror sweeps through France after royalist uprisings and military reverses. Tens of thousands of opponents of the Revolution are executed along with common criminals.

Louverture offers to aid General Laveaux, Chief Commander of the republican forces in the North. Louverture offers his support and 5,000-6,000 troops in exchange for full amnesty and general emancipation. Laveaux refuses and Louverture continues to aid the Spanish for another full year.

The French continue to court the support of the rebel troops. A new decree is issued proclaiming that any slave wishing to join republican army will be granted his freedom. Soon after the offer is extended to troops’ wives and children.

Polverel declares that the certain slaves are now free, specifically those on sequestered plantations in the West, those belonging to émigré planters and deportees, all remaining insurgent maroons, and all those who are fighting for France. Though Polverel believes in gradually granting slaves their rights, Sonthonax is simultaneously planning far more radical action in the North.

Sonthonax issues a General Emancipation decree abolishing slavery in the North. More slaves in the colony have their freedom than ever before. Monsieur Artaud, one of the colony’s wealthiest planters with more than 1,000 slaves, tells Sonthonax that “only universal freedom could spare the whites from being totally annihilated.”

Following decrees further restrict punishments and grant minimal pay to slaves – now called “laborers” – in the colony. Skilled laborers are legally allowed on administrative councils. However, the declarations of freedom are bound solely to theoretical property rights. Slaves are still regulated by the government, legally bound to the same plantations and masters. Their daily lives change little. In protest, many slaves go on strike, arriving to the fields late, leaving early, and doing little work. Disarmed, many former rebels turn to vagrancy as their main form of resistance.Notably, women demand that they are granted equal pay and rights as men. Under the current system women are held to the same rules and punishments but paid only two thirds of men’s wages.

Toussaint Louverture makes his historic speech to rally the blacks, signifying that the revolution lives on.

British troops sever ties between the North and South, isolating the provinces from each other as the Europeans, planters and rebels all fight for control. The British intend to restore order, make Saint-Domingue a British colony, and reinstate slavery.

The first anniversary of the French Republic. Civil commissioner Polverel, combining the principles of the French Revolution with those of general emancipation, gives the slaves on his plantation their freedom. He then invites planters in the West to follow his example. The planters, pressured by Polverel and their slaves, back down and emancipate many of their slaves.

A series of national reforms sweep through France from September 1793 through October 1795. The measures include the abolition of colonial slavery, economic measures to aid the poor, and support for public education.

The Convention officially abolishes in France and French territories, including Saint-Domingue.

A new work code is promulgated. Among other things, it requires owners to give slaves a third of plantation revenue and an additional free day. Slaves’ daily lives are still largely unaffected, however, and the new code fails to ease their discontent. Widespread resistance continues, with many slaves appropriating abandoned land for themselves.

Despite the force of the slave revolution, most colonists are still unaware that the system in Saint-Domingue is slowly breaking down. They do note however that “Unanimous and uncompetitive, the black values his liberty only to the extent that it affords him the possibility of living according to his own philosophy.” They also realize that Polverel’s version of emancipation, in which little actually changes on the plantations, is unacceptable to the laborers and incompatible with their values.

Land ownership in Saint-Domingue was a critical issue before, during, and after the Haitian Revolution. Land ownership granted access to power and prosperity and was sought after by all of the colony’s social classes.

During the build up to the revolution whites were increasingly threatened by the mulattoes and free blacks who were becoming powerful landowners. At the beginning of the revolution, one of the slaves’ central demands was to have small plots of land and an additional free day during the week to cultivate them. Later on, during Louverture’s reign, laborers objected to his adherence to a plantation-based economy which required blacks to work land that was not theirs.

Through the course of the revolution, and in the years following, former slaves felt owning land was critical in order to truly claim their freedom. To that end they fought for the colonists – and even their own leaders – for land rights, never giving up their goal to own the fields they worked in.

France has lost control of nearly the entire colony, aside from Le Cap and Port-de-Paix. The British and Spanish control most of the North, Môle St. Nicolas in the West, and Jérémie and Grand-Anse in the South. Many mulattoes and blacks are aiding the foreign forces with the goal of expelling the French.

The civil commissioners from France are forced to depart. André Rigaud, a mulatto military leader, consolidates the colony’s authority in the South. After these changes, there is a period of relative peace, with markedly fewer protest movements from black laborers.

Louverture abandons the Spanish army in the east and joins with the French forces after the Spanish refuse to take steps to end slavery. His chief officers would eventually become some of the best-known leaders of the revolution, including Jean-Jacques Dessalines, Henri Christophe, and his nephew Moïse.

The British capture Port-au-Prince led by General Thomas Maitland. British troops occupy most major seaports in the west and south. Spanish troops, along with a number of former slaves, occupy much of the western provinces.

Various maroon bands disband and join with Louverture’s forces. A few months later, Louverture and Rigaud along with other military leaders begin launching simultaneous attacks against the British. In June of 1795, after five months of fighting, Louverture takes control of Mirebelais, northeast of Port-au-Prince in the center of the colony.

France and Spain sign a peace treaty ceding Saint Domingue to France after months of battle. The agreement is ratified the following year in the Treaty of Basel.

The National Convention in France dissolves and the Directory is established. The Directory sends five new civil commissioners to Saint-Domingue “to survey the administration and application of French law in the colony, to keep Saint Domingue ‘both French and free,’ and to restore its economic prosperity based on a system of general emancipation in what had by now become, at least nominally, a multiracial, egalitarian society.” Mulatto rights and the abolition of slavery are now considered “accomplished facts.”

Louverture establishes that he is the strongest leader in the colony when Governor General Laveaux returns to Le Cap from Port-de-Paix. Laveaux attempts to reins in the mulattoes, who he believes have been abusing their new rights, and frees blacks from the prisons. Mulattoes, threatened by his new policies and association with Louverture, charge Laveaux with tyranny and begin mobilizing forces against him.  The situation climaxes when a group of mulattoes arrest Laveaux and throw him in prison, where he is kept until Louverture orders his release.

The incident demonstrates a shift in power and solidifies Louverture’s position. Not only powerful, “Toussaint appeared to hold the undivided confidence of the black masses.” Laveaux is forced to proclaim Louverture Lieutenant Governor of the colony. Meanwhile, class and race-based power struggles continue to simmer throughout Saint-Domingue. 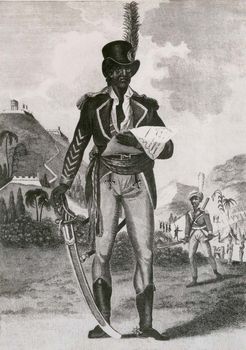 Final withdrawal of Spanish forces from Hispaniola per the peace treaty signed by France and Spain in July 1795.

Rochambeau is dismissed as Governor General after clashing with Sonthonax and returns to France. Rigaud replaces him.